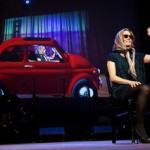 On the 28 September, Augmenti (earlier named AR-Lab), with its CEO Lars Inge Solhaug, attended the annual Evening of Excellence, hosted by the Norwegian Research Council. The event took place at the Oslo Concert Hall. The company demonstrated some of their technology within the field of Augmented Reality (AR) which also is the basis for further research and development for the company.

In the picture we see Kari Slaatsveen, the events hostess, try out her new Italian sports car, the Fiat 500, using AR as visualization. In addition, AR-Lab also showed several examples using the technology within the field of architecture and defencerelated areas.